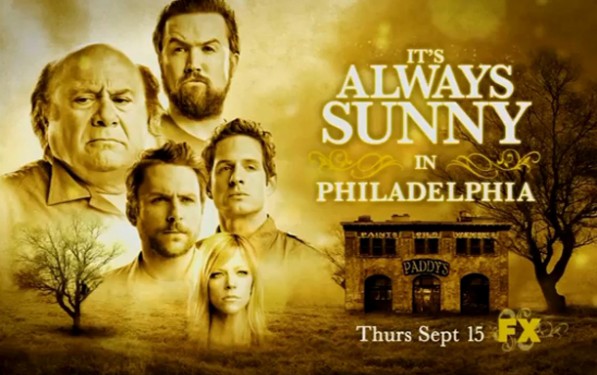 Utterly hilarious dry-humor sitcom It’s Always Sunny in Philadelphia has begun its Seventh Season of idiocy and debauchery.  The show follows ‘The Gangs’ moronic exploits and experiences running a highly unsuccessful and trashy bar in southern Philadelphia.  The show is partially improvised, enjoys strong on-screen chemistry, and a cult fan following.  Indeed a large part of the shows success lies in the fact that the cast enjoys such a potent comedic chemistry.  That said, let’s take a look at the four original characters.  Dennis Reynolds is a vain, egotistical, narcissistic Artisan who is the self proclaimed ‘looks’ of the group.  Mac is the idiotic wanna-be bodyguard and Guardian of the group who doesn’t actually know any form of martial arts whatsoever.  Deeandra is the sad and hopeless Idealist who dreams of being an actress yet has no acting experience of any kind.  Finally Charlie is the ironically illiterate Rational custodian who actually writes most of the show.  While most people exemplify strengths in their temperament these idiots exhibit weaknesses, which quite frankly is hysterical.  Its Always Sunny in Philadelphia airs tonight and every Thursday at 10 Eastern on FX.